My books are still available

You can buy Philip K. Dick: Remembering Firebright on Amazon. 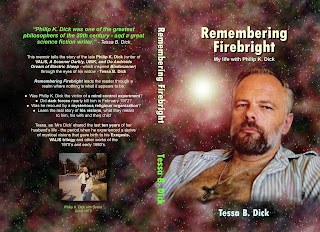 
You can also buy my more recent book Conversations with Philip K. Dick. 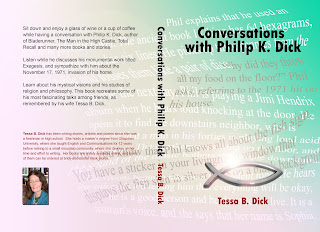 Thank you for your support!

Our first apartment was haunted, according to the girls who had lived there as roommates before we rented it. They had conducted an exorcism after a chandelier fell to the floor, barely missing one of them. Apparently, that ritual had failed. Unusual noises seemed to emanate from the air conditioner when it was not running. One of the bedrooms had a dense, swampy atmosphere. The other bedroom, which was right next to it and had the same northern exposure and ventilation, seemed fine. The haunted bedroom felt like a place where someone had died and left behind an atmosphere of depression, along with a musty odor. At first we paid no attention to the ghostly phenomena.
Rumors were spreading among science fiction fans, at least those who had heard of Phil, that his brains were burned out from drugs and that he hadn’t written anything in years. Actually, Phil had written quite a lot, but it hadn’t been published yet. His novels often came out several years after he wrote them. He decided to attend the L.A. Con (World Science Fiction Convention in Los Angeles), despite his phobias, in an attempt to dispel the rumors that had been spreading since his stay at a drug rehabilitation center in Canada. The convention took place over three days during the Labor Day weekend in September 1972. It wore me out and used up all of our money. We didn’t even have enough money to attend the awards banquet. But we did meet a lady who turned out to be a very good friend. Her name badge read “Linda Wofle”, but her last name was really Wolfe. The typist had made a mistake. We used to call her Linda Waffle, affectionately. She had come to the convention on a whim when her husband asked her to get out of the house for a few hours so he could rehearse his role in a play. She and her husband were both actors. Linda and I got trapped inside the restroom by an enormous woman who insisted upon telling us all about her illnesses and injuries, as well as her membership in the Dracula Society, so we missed Phil’s speech. Fortunately, somebody taped it, so we got to hear it later. It was about how crabgrass and the telephone company were taking over the universe, as well as the difference between androids and humans. Despite the surface humor, Phil’s speech was quite serious.
Phil used to tell people that I had “karate-kicked” David Gerrold at the World Con. That is not exactly what happened. We were standing near the booth that was selling “Tribbles”, amorphous blobs of stuffed faux fur, based on the Star Trek episode that David Gerrold had written, “The Trouble with Tribbles”. While Phil was buying a Tribble for me, David Gerrold sneaked up behind me and grabbed me. I had no idea who he was or what he was up to, but I did feel uncomfortable. Almost as a reflex, I kicked him in the shin and pulled myself free.
The convention took away all of my energy. It was the first time that I ever attended any kind of convention, and it was the first time that I ever stayed in a hotel. All the booths, exhibits and conferences were overwhelming. For two nights in a row, we were up past midnight and out of bed before seven. The days were filled with non-stop action, walking around, talking to people, taking in all the sights and sounds. Editors urged Phil to write novels for them, freelance magazine writers begged him for interviews and an occasional fan questioned whether he really was Philip K. Dick, or just an impostor. The high point came when someone told Phil that Catherine Moore wanted to meet him. Even though I had no idea who she was, I could tell by Phil’s reaction that she was somebody important. He spoke to that grand lady for a few minutes in the hallway, while she explained that this was her last convention. Since the death of her first husband, she had remarried and her new husband wanted nothing to do with “that science fiction crap”. Phil explained to me later that the husband-and-wife team of C.L. Moore and Henry Kuttner had written some of the classic science fiction novels and stories.
at May 17, 2018 1 comment:

Phil had been renting a room from a student at Cal State Fullerton, but when I agreed to move in with him, he rented an apartment for us. We had two bedrooms furnished in 1960s maple with several shades of orange upholstery. The furniture, which came with the apartment, didn’t matter to us, except for the lumpy mattresses on the beds. We were happy, and visitors came almost every evening to sit around and talk over coffee and wine. Phil was constantly trying to figure out who had “hit” his house in San Rafael on November 17, 1971. I met a woman who had seen the devastation after the bizarre burglary, and she showed me a photograph of Phil’s office with a mess of papers all over the floor. She also confirmed that somebody had used explosives to open his fireproof file cabinet, even though it wasn’t locked. Somebody had broken into the house while Phil was stuck on the side of the road with a broken-down car that had been sabotaged. This became a scene in his novel A Scanner Darkly, with some modifications.
Phil also wanted to know what motivated the Nazis. In particular, he speculated about Hitler’s madness – was it caused by drugs, or demons, or what? He was struggling to write the sequel to his Hugo Award-winning novel The Man in the High Castle, which would present an alternate universe in which Nazi Germany had conquered the East Coast of the United States, while Japan ruled the West Coast and a no-man’s land spread across the Midwest. He never wrote that sequel because the Nazis horrified him so much. The more he learned about them, the more he balked at writing the book.
He feared and suspected that the United States was becoming too much like Nazi Germany. We could see signs of the growing police state all around us, fed by the War on Drugs and fueled by racist attitudes against African Americans and Mexican Americans. He was convinced that the hit on his house, no matter who had done it, was motivated by illegal drugs. That is, somebody thought that he had illegal drugs in his house and was trying to retrieve them. Around that time, someone had stolen a hazardous substance from a nearby military base, and rumor had it that the substance was a form of biological warfare that caused hallucinations. A strange drug called “mellow jello”, a gelatin-like mind altering substance that had to be kept refrigerated, was circulating in the Bay Area. The heroin sold on the street had been contaminated, and junkies were dying. Rumor had it that the CIA had deliberately distributed the contaminated heroin. And Phil suspected that a bitter ex-wife might have told somebody that he had lots of drugs in his house.
So perhaps the authorities were trying to retrieve a hazardous substance, or to arrest Phil as a major drug dealer. Alternatively, drug addicts or dealers might have hoped to “score” by breaking into Phil’s house. They had dumped out the contents of his refrigerator, taken stacks of bank statements and boxes of blank checks, and made a mess throughout the house by spreading some kind of white powder all over the carpet. It looked like the work of insane people.


The 1982 film Bladerunner flopped when it opened in theatres, but various hands have permutated the original into about half a dozen versions available on DVD and BluRay, with bonus material and such. After 35 years, director Ridley Scott produced a sequel directed by the French-Canadian auteur Denis Villeneuve. It flopped in theatres, albeit not as badly as the first film.

I did not like the first film, but I did appreciate the greatness of Rutger Hauer's death scene at the climax. I do like the later versions with the contrived happy ending deleted.

I like the new film, Blade Runner 2049, despite its many flaws. I see plot holes and problems with the story, as well as a conflict between the first two hours of artistic exposition and the last half hour of violent action.

Learn more about my thoughts in an interview this evening on Blogtalk, hosted by Karl Kaefer. The show starts at 5 P.M. Pacific, 8P.M. Eastern, and you can watch it later, as an archived show, through the same link.

Learn even more when my next book is published.

Okay, I understand that toilet paper can be valuable in a crisis, but this is getting ridiculous. If you have enough to last two weeks, you&...

tuffy777
Tessa B. Dick, the fifth wife of science fiction author Philip K. Dick (Bladerunner) earned a BA degree in Communications and an MA degree in English Literature from Chapman University. She taught English for 12 years and has been selling and publishing her stories, poems, articles, photographs and novels since 1969. She has appeared on numerous podcasts and radio show, including Coast to Coast AM with guest host Jimmy Church, and twice on Ground Zero with Clyde Lewis.