The Hollywood Reporter has asked for a review copy of Firebright! 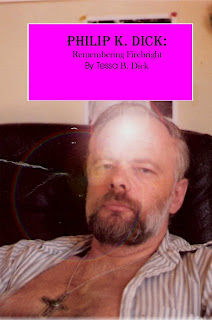 I feel obligated to begin by stating that I disagree with Anthony Peake’s theories about life after death and the sources of creativity. On the other hand, he does present his theories and the evidence for them in a clear and convincing manner. Moreover, he uses the examples of well known people to illustrate his concepts. The author draws upon cutting-edge physics, neuroscience, religion and philosophy. The most interesting aspect of this book is its study of the experiences of well-known people.

Of particular interest for the followers of this blog, is the fact that an entire chapter is devoted to Philip K. Dick. The index lists several other pages where he is mentioned.

The book chronicles Peake’s personal journey as an author and a seeker of truth. His theory about the Daemon and Eidolon explains such phenomena as déjà vu, precognition and the near death experience (NDE). He calls it Cheating the Ferryman, which is also the title of his web site.

Intuitively, it seems right that we are two persons in one body – the soul and the spirit, so to speak. In Peake’s theory, our conscious self is the Eidolon, an entity that knows nothing of any previous life. The other half of the person is the Daemon, the spirit which has lived many times before. This is not reincarnation, but rather reliving the same life over and over again, as soon as the life review begins at the moment of death.

However, I believe that it is much simpler to assign these experiences to the existence of a loving God who created us. I find it abhorrent to believe that the unfortunate people who have suffered death, torture and other forms of persecution would be forced to live that same life over and over. Consider the case of a child who dies shortly after birth – would that infant relive its few moments of life in endless repetition? And what of children who have been abused and then killed at a very young age? Do these helpless victims really want to relive that same life hundreds and thousands of times?

Let’s move on to the chapter about Philip K. Dick. Chapter 10, “Summary: One Man’s Experience”, looks at Phil’s extraordinary visions of March 1974. I won’t spoil it for you. I simply need to say a couple things. First, Phil did not have migraines – he had bad teeth that gave him pain. Second, he was not epileptic – he had multiple personalities. Third, it focuses too much on “Minority Report” and too little on UBIK.

Overall, this book is well worth reading, even for someone like me who does not buy into the theory presented in its pages. It contains a wealth of scientific data presented in a style that is easy for the lay reader to understand. It also gives us glimpses of the lives of people who saw beyond what we call reality to a more substantial universe.

Book Review Soon (has a chapter about PKD)

I'm reading The Daemon, by Anthony Peake, which has a whole chapter about Philip K. Dick. The meat of the book concerns a theory that creativity is related to temporal lobe epilepsy.

I will review the book on my main blog when I finish it.

Okay, I understand that toilet paper can be valuable in a crisis, but this is getting ridiculous. If you have enough to last two weeks, you&...

tuffy777
Tessa B. Dick, the fifth wife of science fiction author Philip K. Dick (Bladerunner) earned a BA degree in Communications and an MA degree in English Literature from Chapman University. She taught English for 12 years and has been selling and publishing her stories, poems, articles, photographs and novels since 1969. She has appeared on numerous podcasts and radio show, including Coast to Coast AM with guest host Jimmy Church, and twice on Ground Zero with Clyde Lewis.